All began well with my attempt to tangle along with the Zentangle team's Twelve Days project.  I shared an unshaded sneak preview when I'd completed four days.  And then it all went wrong, and I hurt my arm.  But slowly and surely it's getting better.  Still a little weak but, wonder of wonders, I'm able to tangle again!  After a couple of days of warming up on Bijou tiles I returned to my Zigzangle alternative to the official spinner.


In my opintion ZTHQ did a very clever thing this year by not introducing new tangles or new techniques.  But instead taking us hand in hand through a glorious retrospective of those old and dusty, true and tested tangles that we all learned in the beginning, and some of whom we probably now rarely use.  I'm loving reacquainting myself with Festune, Umble, Jonqual and Betweed as well as meeting new friends in the shape of Fracas and Quabog.


I managed to fit most of the tangles from the project onto my Zigzangle - although it was a bit of a squeeze and a couple of the days (6 and 12 if you crave details!) had to spread themselves out across the entire length.  But it's affirmed my pleasure at working on these long and winding tiles.

And so that brings me to the end of my last blog post for the year.  I'll won't be spending much time at my computer for the next couple of weeks.  In the last few months I've fallen into a more steady rhythm with my posts and have enjoyed the momentum that gives me and I have lots of tangle posts pencilled in for next year.  So, whoever you are, where ever you read this - thank you for sharing this strange world of black ink and graphite with me.  Best wishes for your festive season and see you next year!
Posted by Ragged Ray at 16:00 4 comments:

I had all sorts of wonderful tangling plans for this week and those ahead.  I started strong on Monday throwing some seasonal style at a couple of Persian Mosaic triangles (please take a look at my previous post if you want to know more about the Persian Mosaic scene).


But life had other ideas when I hurt my arm on Tuesday morning.  I've rested it since, and today was the first time I picked up a pen, holding it far more tentatively that usual.  I had grand plans for a Poke Leaf Wreath (trying saying that in a hurry!) for the Diva's Holidaze challenge, but needed to scale back my plans.  Instead I managed to tangle a Zenbutton on some suitably deep green pastel paper.


The wreath will still be there, for another week, another year - the good thing about tangled Pokes is they never wither however little you look after them!

When I tangle I mostly tangle for tangling sake. I rarely 'use' my tiles for anything, and I hardly ever tangle objects. When I see other people making things with their tangle art I'm suitably impressed, but that's not what I want to do on a regular basis. For me the pleasure and the benefit is tangling with no destination in mind.

But there are occasional exceptions - and I thought I'd share a few festive pieces from past years as the build-up to the Christmas season gathers pace.

I've dabbled in Zentangle inspired greetings cards for my nearest and dearest. I've cut out Baton tangled holly leaves, with vaguely Bunzo berries. I've stacked various tangles on a large parcel label and mounted it to a card. But my favourite Christmas card is this one - where I used Distress Inks to colour a tile graduating from green into red. I then tangled using the unintentionally festive LitBee alongside my own tangle Tira. 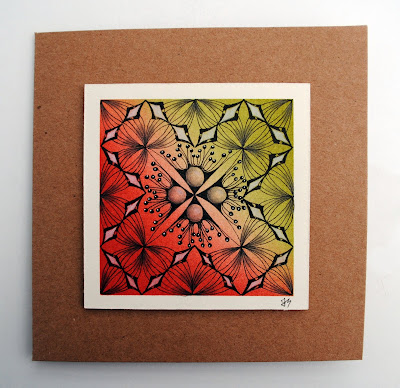 There's always a tile in a simple frame that sits on a shelf in the room where I tangle and write these posts. It's usually a recent tile, one that I'm particularly happy with - it inspires me and guides me on those inevitable days when the line wobbles and my shading smudges. Sometimes I'll frame an additional tile suitable to the season and put it on a shelf in our lounge.

But last year I took the plunge and tangled a set of four coasters for use on our Christmas dinner table. I coloured tiles with Distress Ink, and then tangled in black and complimentary colour with shading and highlights. As well as varying the tangles I made sure to repeat some over all four coasters to bring the set together. These tiles were then sealed inside a set of glass coasters that I found on Amazon. A pleasingly personalised addition to our tableware, and one that we will be pulling out again this year.
Posted by Ragged Ray at 13:39 13 comments:

The year is running away with me.  The list of things I need to do, let alone want to do, is longer than will fit into the days that are left.  I'm sure I'm not the only one feeling this way.

I don't want to totally sacrifice the things that calm and refresh me, things like Zentangle.  This is just the time when I need them most, to charge me up to keep going.  But what I can sacrifice is any unnecessary pressure that attaches itself to my tangling.  I can particularly dispense with worries about deadlines.  I've made a habit of being fashionably late for Zentangle challenges all year, so why worry now!

There were a couple of challenges that caught my eye last month - but which I only finished today.  One was Adele Bruno's It's a String Thing #269.  She introduced an idea she learned at ZenAgain from Maria Thomas.  That of starting at one corner of your tile with a tangle drawn large and then the same tangle smaller from the other corner and letting them meet in the middle.  Adele suggested we try this with Soluna.   It was a great choice and the time I spent on this tile was so relaxing, steadily drawing one orb after another, embellishing some more than others, not worrying about any orbs that had an odd shape, as the later crescent auras and shading would smooth out any inconsistencies.  I love the depth in the finished tile and I know it's an idea I'll visit again.


I also couldn't resist joining in with the most recent of Hanny Nura's wonderful Full Moon Mosaics.  These are based on Instagram and there will be a new one starting quite soon.  She dreams up the most delightful ideass and runs each one to time in with the phases of the moon.  The last one involved a circle of Marguerite Samama's Madama in the middle, and A-dalfa around the edges and a tangle of your choice in between.  I chose Nik and used lots of dark auras and repeating lines to pull it all together.


Like many others in our community I'm currently joining in with the Zentangle Twelve Days project.  I'm enjoying watching the videos, sucking up the enthusiasm of the team, and being reminded of some great older tangles that had been gathering dust.  I'm not working on a Project Pack spinner though -  I don't get on with large ares of paper.  Instead I've decided to do the Twelve Days as one of my Zigzangles.  It doesn't divide neatly into 12 sections, or more, so I'm cramming the tangles in how and where I can!  I've left some spaces in the centre of each panel, I don't know really why, but I'm hoping that something will crop up on later days for me to go back and add to the spaces.  Or not!

I don't usually share unfinished pieces, and I won't shade until the end because I'll only get covered in graphite on future days, so I'm feeling a bit exposed with only my naked line work for you to see!
Posted by Ragged Ray at 15:40 2 comments: