I started this sketchbook page over a month ago - but I think it has spawned enough results now for me to share it and them with you. 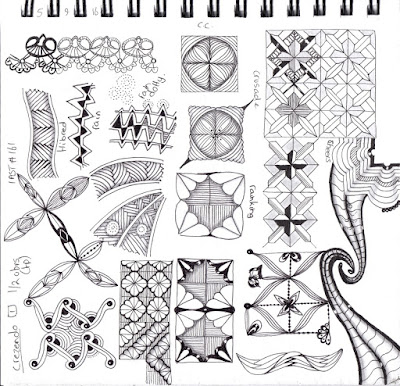 My responses to a couple of challenges took shape on this page - as well as a bit of playing about with Rainking for a tile to go in the Square One Magic Bag (I'll keep that one a secret so the group gets the thrill of the reveal when that is the chosen tangle).  I also used a variation of CC to start a tile for the Travelling Tangles Project that has now winged its way to Australia.


And then things started to get a bit crazy.  Crusade is a really tricky tangle.  Very unforgiving of even the slightest wobble.  It takes a lot of concentration to get the lines in the right places - but it does look great.  And I feel quite similar about the colour red.  It's stunning - but so temperamental - so hard to manage with elegance.  So why oh why did I decide to grab the pot of red when experimenting with my new Brusho powders (I'm in try-new-things-for-backgrounds mode at the moment, can you tell?!)?  I was also reading a novel called His Bloody Project - the title of which must have been worming away in my subconscious while I drew this tile.


Lastly, I wanted to try something with Cheers, and I wanted it to be a Renaissance style tile.  But that wasn't quite how it turned out - something wasn't working and to make it work better I grabbed some green pencils and got to this. 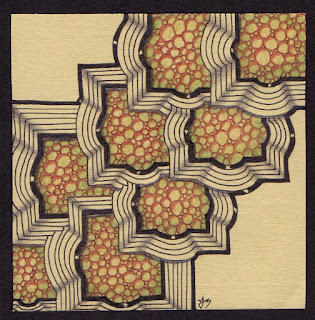 Which makes me think of a dusty gallery hung with framed portraits, of long-dead relatives, all of whom drowned.  Although the images have all since vacated their frames, leaving only the bubbled green waters of their doom.  Or something like that!
Posted by Ragged Ray at 10:05 4 comments: 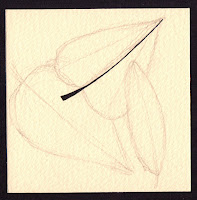 This week's Diva Challenge took a turn for the autumnal - always a welcome area for me to explore.  Love the colours, love the shapes, love the poetic opportunities of the season.

I remembered seeing a tile on my Leftovers Pile that I'd previously drawn some leaf-strings onto.  Time to work some life into that stalled square...

I challenged myself not to over think this one.  So just picked three tangles that I'd been playing with over the last couple of weeks and used those to fill the three leaves.  I added some colour - which came out a bit more muted than I planned, but now I'm done I really like the subtle tones.  There's a time for vibrancy, and a time for something a bit more misty.  It needed a border to stop those leaves looking lost on the tile.  Plus some shading of course.  And there you have it! 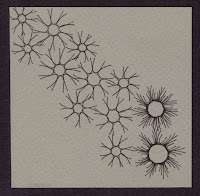 I haven't spent much time tangling in the last week as I came down with a nasty cold.  I'm getting better each day, but to get myself back into the swing of drawing a steady line I thought I'd grab a half finished tile from the Leftovers Pile.

This is the one I grabbed. It was an idea for a new tangle I was playing with in the run up to Christmas last year - when my eyes were full of snowflakes and stars.  Something wasn't working quite right, so I abandoned both tile and tangle. 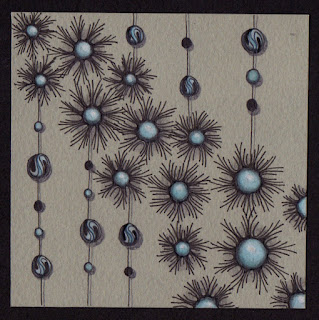 But I spent time with it yesterday, adding a few more detail lines, some lines with beads and Cruffle, and some colouring which made the centres look almost pearl-like.

Slowly I started to realise how this strange little tangle actually resembles microscopic images of viruses.  Not necessarily the most pleasant inspiration, but versatile and very apt considering my recent incapacity!

I drew a quick step-out and named my tangle Tira - which sounds like it could be a new strain of virus, one that makes its sufferers reach for black pens and spend hours drawing intricate patterns! 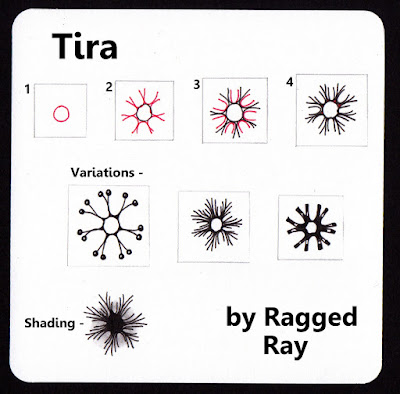 [If you use Tira I hope you have fun, and would love to know how you get on with it.  I don't think I've seen anything too similar on my tangle travels, but if it repeats a previous tangle, or name, please let me know and I'll remove it.]
Posted by Ragged Ray at 13:55 4 comments:

I don't sleep, I dream

This week's Diva Challenge was to use Daniel Lamothe's most beguiling tangle, Dreamcatcher.

I was telling someone just last week that one of the reasons I tangle is that it shifts my thinking in a direction that often inspires new thoughts, ideas and memories - many of which I can then pour into my writing.  And this week that happened in bucketfuls. 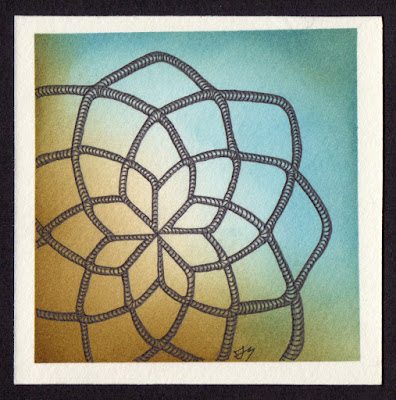 I was utterly lost in the drawing of these simple petal shapes that go round and round.  In filling them or not.  In sinking through them, past them, beyond them.  To when I lived in a flat with a dreamcatcher hanging in my window.  It was given to me by the sort of friends who give you presents in paper bags - panpipes, candles and a star-shaped tambourine.  It was given to me at a time when my dreams tasted of red wine, and I quite often went to bed once the sun had already risen.  Given by friends I thought would be together forever, but like the dreamcatcher and the panpipes - some things are only meant to be in your life for just as long as you need them.

But anyway - back to the art.  There's been a lot of experimenting with Distress Inks of late - and I played with them the watery way and found them vibrant but unpredictable and I'm a woman who likes control.  But by using a little smoothing tool I created some backgrounds I really love.  They look like old Polaroids (complete with the odd rip where I pulled the tape off too quickly! ) - the sort where the camera went off at the wrong moment and took a picture of the sky.  I've made quite a few backgrounds - as I got rather caught up in the seemingly endless ways to blend the subtly differing colours - but this is the first time I've tangled on them. 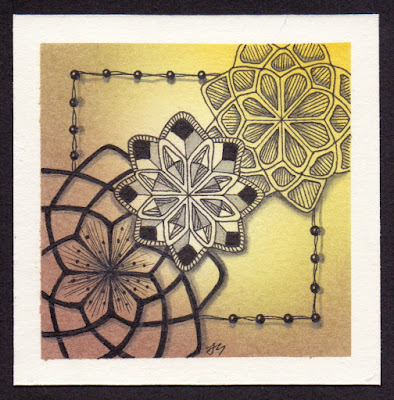 On the first tile I drew the basic outline of Dreamcatcher and then put an aura within each section and filled that with tiny curved lines.  Once I'd done this I shaded it there and then before adding anything else.  And I hit that wall - you know the one - where you don't want to add anything else for fear of ruining the thing you've made that you really like.  I fought with myself and then I surrendered.  I like it as it is and that's the way it will stay!

But... there was nothing to stop me drawing another tile.  This time three Dreamcatchers - each filled and embellished in different ways (with clear nods to Cubine and B'Dylan).  A bit of Beadline to balance it all out and I quite like this one too.  It's warmer and more welcoming - whereas the other looks like the sun setting on a difficult day.
Posted by Ragged Ray at 17:26 15 comments: