My 'newest' tangle has had a strange evolution - born in disregard and rapidly abandoned to the care of others, I felt it was time to welcome it home and show it some love.

For the first half of 2020 I worked on Alice Hendon's Zen-Untangled project, working through the entire collection of 'official' Zentangle tangles. I drew mine onto ATCs which I keep in a small tin. It's become a handy resource I dip into whenever I need inspiration.

My good friends Debbie and Stephanie from 7F5R infused about my tile, particularly my version of Static. They encouraged me to name and claim the tangle as my own. I was stubborn and reluctant, insisting it was merely a tangleation and sure that others were already using it. No amount of cajoling would encourage me to draw a step out and share it at that time, however I gave them my blessing for them to share it, which they did. You can see Stephanie's step out for Ecstatic, her example, not to mention her perspective on my reluctance here!

I'm thrilled to learn that Ecstatic will be featured in Stephanie's selection of tangles for this year's Inktober. In honour of this I thought I would spend a little time getting to know my orphaned tangle. This time with my heart and mind a little more open to its potential.

Static was one of the very first tangles I learned, but I've never particularly enjoyed using it. Those zigzags rapidly start to round beneath my pen and it only ever becomes background patterning rather than anything particularly exciting in itself.  However in my 2018 sketchbook you can see that I started to play around with a variation, which appeared again when I was practicing tangling using purple ink on the back of a tile.

The key difference between Static and Ecstatic is that you don't draw every line of the zigzag, some are cut short. 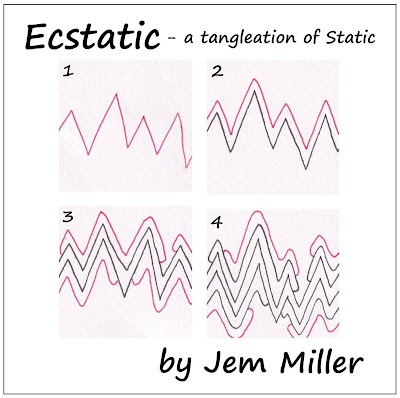 My stepout differs slightly from the way that Stephanie drew hers, both work equally well and you may have one you prefer.  As I've worked more with Ecstatic a number of variations have appeared. Extra interest can be added to the tangle by rounding, or blacking out sections of the rows after drawing them.  The lines themselves can be thick or thin, or even a mixture of the two, and can be kept sharp or more rounded. Shading can be done in blocks like we do with Static, or each row shaded individually to give a sense of texture. 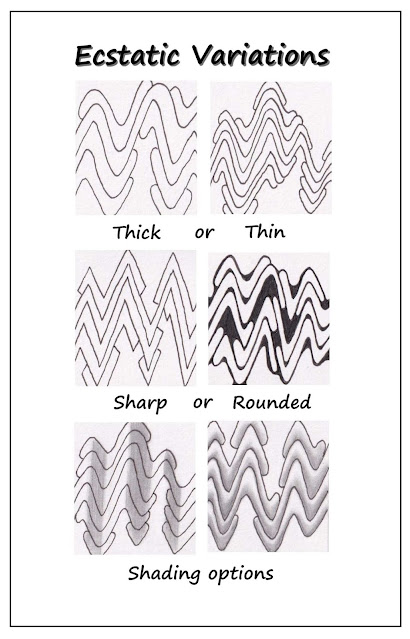 Because Ecstatic grows one row at a time it allows you to tuck in other tangles as it builds. I like this as I'm always looking for easy ways to get my tangles to meld with one another.

Another simple way to bring additional drama and layers is to tangle your Ecstatic first, and then go in afterwards with your black pen (maybe a thicker one if you're impatient) and adding solid black tangling or ribbons. The following progression shows how this tile came to be and also demonstrates how forgiving this tangle can be – the original lines are pretty wobbly in places but that soon gets lost when more tangles, rounding, shading and highlighting added.

A year on from casting this little tangle into the hands of others I've learnt a lot. About being willing to come back to an idea and look at it again with fresh eyes and a less jaded heart. Not to mention the importance of listening to friends when they tell you something has merit! Thank you Debbie, thank you Steph – there would have been no Ecstatic without you!

I hope fellow tanglers enjoy using Ecstatic - I'd love to know how you get on with it!

out of the darkness

Despite my love of all things dark and dingy I really struggle to find pleasure when working on black tiles. The white gel pen feels too thick, the extreme of white on black too harsh, and the shading effortful and hard to control. And that's just the basics - introducing colour onto black tiles becomes even more baffling to me. I don't want my tangling to feel like a chore. So I was quite excited when I stumbled across this technique towards the end of last year.

I discovered by accident that when you use white gel over certain colour the colour is taken on by the white, and something almost magical occurs. I've been refining the technique ever since and am pleased to share ZenAurora with you. I named it after the aurora (borealis and australis) - the elusive night-sky phenomenon that few are lucky enough to see.

The technique is simple to achieve – three steps is all it takes. Everything you need to know is contained in the following image. However I wouldn't be me if I didn't go into greater detail about my experiments and findings!

The first step involves getting the colour onto your black tile. I've only tested this using the watercolour pens I have on hand. I have a few Ecoline pens, a few Tombows and some Sai brush pens but mostly I've used Zig Clean Color brush pens. I usually pick two or three colours and take turns to lay the colour down covering the whole tile. Sometimes I do stripes, or arcs, or blobs, or patches. You might worry about not being able to see where you've coloured, but some shades lightly tint the paper, and also while the colour is still wet you can see it. It doesn't matter if your colours overlap, and it doesn't matter if you miss parts, as these will appear as pops of bright whiteness.

I discovered that not all colours work equally. Some change colour quite radically, while others fade to insignificance (as can be seen clearly on the chart below). I've also found that intensity differs depending on the paper used - it's more muted on the official Zentangle tiles - possibly because of their rougher and more absorbent surface. On smoother paper (Clairefontaine PaintOn, and Stonehenge Aqua Black) the colours were more vivid. You might prefer it one way or the other. Leave your tiles to dry after colouring. I often prepare a bunch and then tuck them away ready for when I want them.

The second step is where the surprises really happen. Grab a pre-coloured tile and a white gel pen. I've used Gelly Roll in all my examples but I tested a couple of other brands and they worked pretty much the same. Remember that you can use different widths of Gelly Roll which will give you different looks to your lines. Simply tangle across your tile and your lines will magically pick up the colour that you pass over, shifting as you move from one patch to another. Fun right? Once you've finished tangling allow your white ink to dry.


For the final step you can shade if you choose to. I prefer not to add white highlights but to darken areas of overlap instead – and for this I use a black coloured pencil as to me it looks better on the black tile than the shine left by graphite pencil. If you're wary of shading I think there's enough interest just from the tangles and shifting colours themselves. Certain colours of watercolour pen leave a noticeable colour on the tile. Mostly this will be covered by your tangling, but if any remains and it bothers you, you can calm it down by going over that area with your black coloured pencil. I also sometimes use my black ink pen to really darken some areas or add perfs or tiny detail lines.

Remember that ZenAurora is not an exact science. You will have unexpected results, some might be disappointing, but many will be wonderful – and I think it's worth the risk.

I trialled many little scraps and Bijou tiles while getting to know this technique. I found colour combinations that I loved, and many that didn't appeal to me quite so much. I also found tangles that worked better than others – but you may be drawn in entirely different directions. Floral and organic tangles seemed particularly successful - my personal preference was for tangles with lots of detail lines and repetition. You might like to test out some combinations before you start on full-size tiles. Or you might prefer the thrill of just jumping in and seeing what happens!
Ultimately ZenAurora is about having fun - watch as your humble white pen shifts through the spectrum, illuminating your tile as if it were the night sky. I hope you have fun with this technique and I'd love to know how you get on.

I was almost finished preparing this post when I learned that Apple Lim had shared a video on her YouTube channel demonstrating the same technique. With many miles between us we had no idea that we were working on the same thing, at exactly the same time. Apple has graciously encouraged me to share my explorations with you, so please do take a look at her video which ably demonstrates her process.

I've also just learned that queen of colour Heidi Kay uses this technique in a number of exciting ways.  She has classes for bringing wild amounts of colour onto your black or white tiles.

Thanks also to Anica (Zen Linea) for encouraging me from the earliest stages of this idea. She does some truly stunning work on black tiles - please take a look at her examples and classes.