Not much time to tangle this week - but how could I resist the Diva's invitation to play with Aquafleur.

I took a rather yucky yellow tile and went all angular on it - inspired by Rick's Aquafleur triangle and the Aquafleur with a hollow middle on Shelley Beauch's blog this week.  I also popped in a few Deco-style fillers which I've been playing around with all week. As I was tangling my partner was busy in our kitchen, baking a surprise cake for my birthday tomorrow.  When we'd both finished our makings I went through and she revealed the cake to me - lemon and poppyseed.  I had no idea what she was planning and she had no idea what I was tangling - but if ever a cake and a tile could match, these surely do!
Posted by Ragged Ray at 12:40 6 comments:

Anything that encourages me to slow down and take my time is a good thing - so meeting Margaret Bremner's Dansk tangle via this week's Diva Challenge was most welcome.

Margaret suggests we don't start with too many individual Dansk sections - but it's always tempting to want more, more, more of a pleasing tangle.  I kept my numbers fairly limited in this first tile drawn onto a background I'd coloured using Distress Inks. 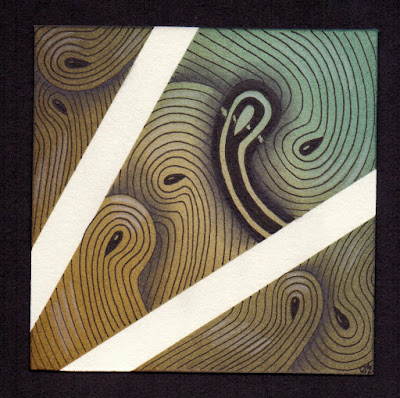 There was no additional colour added - just graphite and a little white pencil for highlights.  It's tempting to shade with more colour but sometimes I like to stick the muted tones of the background alone. As the Dansk grew bigger, it was easier for my auras to grow a little wobbly, but I just about managed to tame them.  This reminds me of 70's wall paper, of peacocks, of coffee drunk at dusk.

I had another go with Dansk on an original Zentangle tile.  The tooth of the paper made my line slower and short tails on the Dansk also meant the auras were more manageable.  I couldn't resist squeezing in more this time and I changed the tangle a bit by interweaving the auras too.  I built up the graphite shading layer by layer to add a sense of roundness to the two panels. 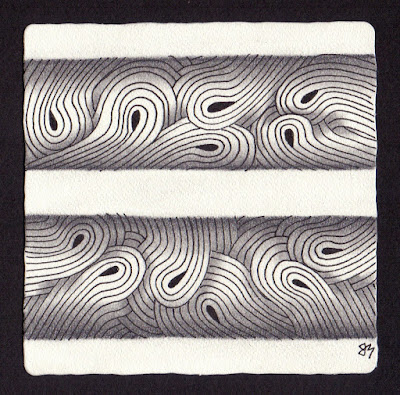 I like the way my eye plays with what I'm seeing - am I looking through white bars to the scene beyond - stylized waves on a stormy sea.  Or am I about to reach out and touch two ornate tubes, perhaps part of a strange engraved musical instrument?  Zentangle is not meant to look like anything in particular, but my mind can't help but make up stories to explain the things my pen has done. 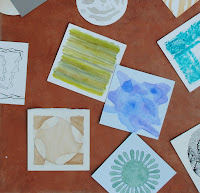 Sometimes I wonder if the tangles I chose to use and the colours I select on any given day bear relation to what's on my mind, or what's going on in the world.  Maybe not, but I can't rule it out.  As the UK election pounds toward its conclusion my sense of hope tinged with doom casts a shadow over everything I do.  And so I find myself making heavy use of black in recent tiles.  None more so than on these two.

I selected a couple of tiles from my Leftovers pile. A striped green one that I did very early on in my dabblings with colour - I've often been drawn to the colours but found the strong stripes off putting.  But breaking them up with some dark curls showcasing a variation of Papermint that Sandy Hunter recently shared on Facebook really did the trick.  I was tempted to leave the centre section empty and then changed my mind and popped in another Sandy tangle - a nameless one I admired on one of her blog posts. 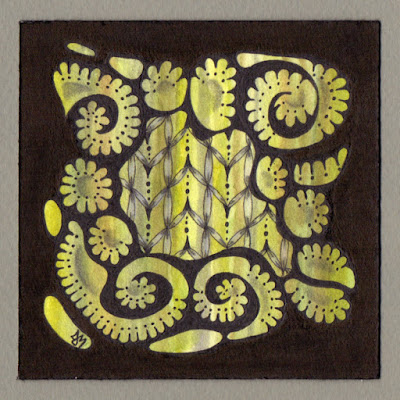 I feel a sense of hope when I look at this tile - it's like I'm peering through vines and ferns in a magical forest and the green of livingness is so vivid I feel I could taste it, and there just ahead is a sparkling curtain of water droplets, perhaps a waterfall, perhaps just a tree shaking off the recent rain. 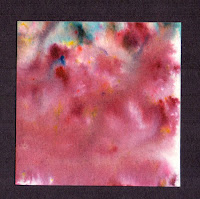 Things took a darker turn with the second tile.  This crazed background I made a while ago while testing out my Brusho powders.  They have a certain charm but are hard to tame - perhaps better to let them do their thing and then work with them rather than against.  I saw crushed berries and bruises before I began, but perhaps the influence of the Dracula television series we are currently watching seeped in because this is what happened when I added three sections of 2V (recently shared on Tanglepatterns). 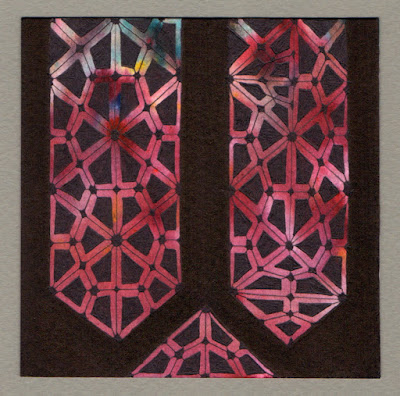 2V is a great tangle, striking for it's ability to look great even without shading.  But it's one that, for me at least, needs a lot of concentration not to make a mistake on.  The section on the left went very well, with only a tiny error, but when I started on the one on the right it all started to fall apart, when I made a few wrong connections and divided a couple of my sections into too small a triangles!  It looks like it's collapsing, unable to hold itself with the elegance of the section on the left.  But I think we all have days when we feel like that!

There's an undeniable darkness to this tile - I imagine myself in a desecrated church, staring up at the stained glass windows and wondering how much longer they will hold themselves together.  I also picture bloody pennants hung from the ramparts of victor's castles.  And while it's felt tooth and nail at times lately, thankfully we don't decide our leaders on the battlefield these days!
Posted by Ragged Ray at 15:28 1 comment: