According to this blog it's been months since I've done a Diva Challenge - but this week's really caught my attention.  The Diva invites us to play it straight - using only straight lines on our tile.  While I love the calm precision of straight line drawing, it's the curves that forgive our wobbles and inaccuracies.  It's the curves that truly allow us to feel the freedom of the 'no mistakes' motto.  But it's not a challenge if it's not challenging!

I played around with straightening out a few curvy tangles - with mixed and maddening results.  After abandoning those I decided to try on a couple of my own tangles.  And the results were quite surprising.  These are the two basic seeds of my Snag and Sati tangles.  Curves and loops galore.

And this is what happens when you straighten up and fly right.  A block of 4 Snag in the centre with detail lines and then a border of the beautifully boxy Dex.  Some simple shading just to add dimension.  Drawn on a tile cut from Murano pastel paper. 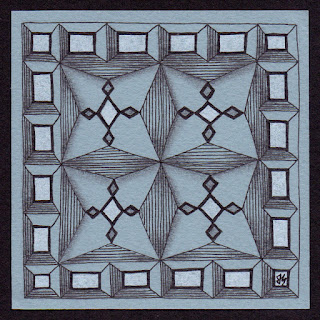 My second straight lined tile got even more lively.  In the middle 4 Sati - with diamonds instead of rice shapes to start and then a zig-zag line to join them.  Bands of Rain join the Sati to the corners, some straight Mssst in the middle, and the areas along each side filled with one of my favourite straight tangles - Baton.  What's a little scary is where my subconscious took me with the second tile!  We had an electrician in fixing a broken fan and fitting a new light but thankfully there were no bangs or sparks sent flying despite what my tile seems to prophesize! 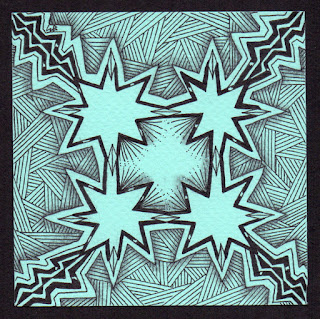 After my last blog post, where I shared a page from my sketchbook, I received so many warm and enthusiastic comments.  I began to think that this might work as a regular feature on my blog - a place where I periodically share a recent page and show the tiles that emerged from it.  Inevitably it takes a few weeks from me starting a page (and dating it) to filling it and then only later the ideas and trials filter through to finish tiles.

And so, let me take you back to mid August, when I began this page - 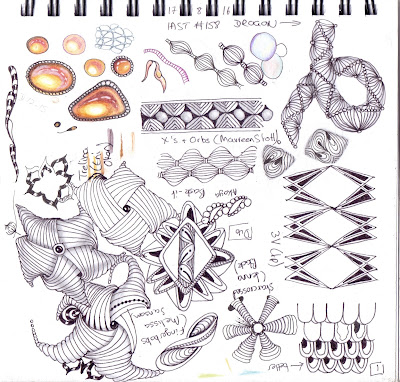 You can see a little cluster of practice gems in the corner - these eventually made it onto the Zendala I shared in my last post.  Sometimes ideas from more than one page have to learn to work together!  I'm relatively new to gems and didn't get off to a great start when in haste I grabbed a chalk marker instead of a blender - hence the dull milky look to a few of them!

You can see my Drogon practice which went onto a tile for an Olympic themed It's a String Thing challenge.  A little burst of Jenna Black's Starcrossed got repeated several times on a very warm looking tile.  And that strange fusion of A-dalfa and Viaduct become the start of a tile that I will send to someone else on the Travelling Tangles Project (I've started to accumulate a little stack of pre-prepared tiles so I have some to hand any time I need to send one, or more).

And then things started to get really dark!  I had a tile that didn't work out - a while back I'd tried to prepare a background that vaguely resembled the Aurora Borealis - but it looked a mess.  So onto the pending pile it went.  But then I spotted it and thought I'd have a go using the very spikey 3V.  I darkened some sections, and filled others with Baton and an alternative version of Hypnotic that's been doing the rounds (and that featured on the sketchbook page before this one!).  It's a crazy tile but I like it for that!

Another beast that rose from the darkest depths is this Trelina (a tangle by Eni Oken) climbing through the A-dalfa frame.  The background was one of my first attempts at using distress inks.  I also did some coloured shading and also threw in some bubbles and white highlights.  And you have to take my word for the fact it looks much better in real life - the scanner doesn't like the deep colours.

There are a few other little scraps of this and that on the page that didn't make it onto a tile, but you never know, they might do soon...
Posted by Ragged Ray at 10:55 6 comments: