stones in my pockets

Much of my recent tangling has taken place within a journal, thanks to being caught up in the Tangled and Journaled Facebook group and their Little Summer Project.  I've enjoyed following the prompts and working within a journal has been a new, challenging and only infrequently frustrating process.  That particular project has come to an end, so I'm looking forward to getting back to work on some loose tiles.

The first of which was a tile for this week's Diva prompt - a guest post by Jane Reiter who invites us to tangle with the wonder of Petoskey stones held in mind.  I did, but perhaps they rattled around a bit too much, because their influence was a little lost by the end!  I pencilled a light hexagonal grid and then added a 6 sectioned variation of Moonpie.


Until I have something more current to share with you, I'll offer you a set of green tiles I finished a couple of months ago - companion pieces to the grey and honey tiles I posted way back in May. 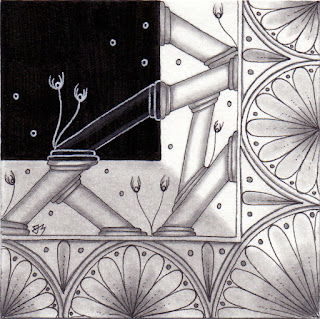 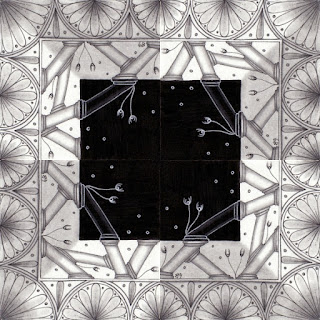 only far more fabulous as her mosaics also involved the work of 28 other tanglers.  Follow the button to see the results and go on, join in with the next one when it is announced at the end of October!