a knightsbridge too far

This week's It's a String Thing challenge invited us to use only Knightsbridge.  Like many tanglers it was one of the first tangles I learned and I used it on my second ever tile (pictured here along with the resulting wanderings that gave me the name for this blog!).  It's a great tangle for beginners - striking to look at but easy to draw.

But I don't use it much these days.  When Adele suggested it, to work with the particularly loopy string she chose this week I realised the challenge was truly on.  I had to get to know this tangle all over again, and find what it could really do.  Armed with all the various tips and trick I've picked up over the months I filled an entire page of my sketchbook with Knightsbridge and its variants.  At times it's hard to tell what is a tangleation, and what is a new tangle - but don't let that stop us!

I particularly wanted to see if I could round the tangle a bit, if I could knock back it's extremes, both to ease up on that constant heavy black filling, but also to allow other tangles to sit on top more easily.  I also wanted to increase its shading potential.  I came up with a handful of Knightsbridges that I liked and thought I'd share them here - it's a good place to keep them safe for when I need them next, and others might also like to use them.

I used a combination of the two at the top right to draw a second tile for this week's challenge.  I was intending to pattern the entire string line, but mistakenly drew the background grid first.  I had to colour the string in full black to hide the lines, but then it looked a bit like an inky slug trail across the paper, so I went in with a white Gelly Roll to add highlights - I haven't done this before, and I quite like the result although the pen is quite a culture shock after the fast drying fine point of the Micron pen!

The tile reminds me black and white films of people playing snakes and ladders.  It reminds me of a house party I went to as a teenager where the kitchen was almost as big as my parent's house - I drank a lot and spent the night mostly mesmerised by the tiled floor.
Posted by Ragged Ray at 14:57 No comments:

I haven't tangled much lately - sometimes life gets in the way.  But this week's Diva Challenge got me back into it in the best possible way.  I reminded me that amid the weekly challenges I take part in, and the new tangles I learn, from books and online, I sometimes forget the simple pleasure of just drawing for drawing's sake and seeing where that takes me.

So unbound by the limits of a tile, I took my sketchbook and drew round a miniature jam jar lid a few times, and filled each circle with whatever tangle seemed to appeal in that moment.


And I was thoroughly lost to the moment I spent with pen and pencil in hand.  If I hadn't started feeling hungry I believe I might have carried on off of the page and onto the table itself!  When I look at these six circles I picture a huddle of women beneath madly decorated parasols.  I see monochrome kaleidoscopes and Wonka sweets.
Posted by Ragged Ray at 16:08 13 comments:

This week the Diva challenged us to a Duotangle - and it took a fair while for me to find a way for Punzel and Well to work happily together.  They don't easily create harmony.  I tried with a pile of Well-decorated cubes, with the Punzel spilling out of lifted sections - like a strange Jack-in-the-Box but my cubes were way too wonky.

And then, away from the tile, something came to me.  And it was the recollection of those tangles where they wrap round a tube and you get that great sense of perspective, and suddenly I could see what might work.  And I think it did.


Now I'm picturing a rewriting of the fairy tale - Rapunzel is up in her tall tower with nothing to do as she waits for her prince, and so she plays the strange pipe organ she finds there, and her plaits pass through the pipes and grow longer with each song she plays.
Posted by Ragged Ray at 16:25 13 comments:

As soon as I grabbed a pen and started playing with Laura Diva's new tangle - tentatively titled Somnee - I loved it.  I filled a page with it - I did all sorts of weird and wonderful things with it.  It's a very satisfying tangle to draw - once you get over the fact that your initial orbs will never be as circular as you'd like them to be!  I like the way it is a tangle that stands well in its own right, but allows for other tangles to work in the orbs or sectors it creates.  It also allows for infinite shifts in the balance between dark and light - which can really help on a tile.

Somnee reminds me of this weird tracing toy I had as a child.  It involved pieces of plastic in a strange grid formation that allowed you to place a pencil in one end and pass a pointer on the other over an image and it would copy it, as if by magic, to another paper.  It never worked that well - magic rarely does.

I liked the first tile I created with it - it was fun to draw.  But it looks disturbing.  Like a sinister futuristic world where familiar things are now accessed via metallic pathways.  It looks like the kind of dream I'm pleased to wake from.  I decided to rectify things with a second tile.  Where nature makes a come-back, in the form of a big bushy Flux.  Up from the wreckage grows hope.  And I like the look of this one far more.

It seems that while I love Somnee I've got to take care not to use too much of it.  Tangles can be a bit like food - just because you like something doesn't mean it will taste good everywhere.  Smoked paprika on a cupcake? Custard on a pizza? No, I don't think so either!
Posted by Ragged Ray at 16:06 9 comments:

waiting for the fall

The wonderful world of Zentangle has good and bad days - I'm learning to live with that.  Not every tangle, or every tile pleases me - but often after a dud, one I really like comes along next.  And the process is (usually) always a pleasure.  The Day 26 activities that Beckah Krahula suggested left me feeling like I was playing with a yo-yo.

Pokeleaf was introduced as a variant to Pokeroot and I found it far more satisfying to draw.  Anything orbish often leaves me thinking it's too flattened or wobbly, whereas leaf shapes seem to make sense to my pen - maybe because I spend a lot of time writing about trees?  But Growth felt a bit lame, and despite much practice I couldn't draw it in a way that looked or felt good.  To add insult to injury I decided to try again with Bucky - that most stubborn tangle.  I did it but the result is a bit awkward - each tangle looks like it's standing uncomfortably next to it's neighbour.  My Growth pyramids remind me of Croquembouche - which look impressive, but I'd rather have a decent serving in my own bowl!

The second activity was another one using colour - and I used the coloured pencils I had to hand.  I don't think they are particularly good quality as you have to be quite firm to get much depth of colour out of them, but it was fun to play with shading using colour rather than just graphite pencil. I used Dex - which I'd spotted on Tanglepatterns, which creates a lovely blocky base for my Flux to grow out of.  I love Flux - but mine often come out as single slender vines and I want to try to make them work differently.  I popped a few Cruffle in to fill the space around.  And I like the result.  It looks like the kind of floral decoration an interior designer might install in a loft conversion.  Some soft red leaves to counteract all the glass and brickwork. 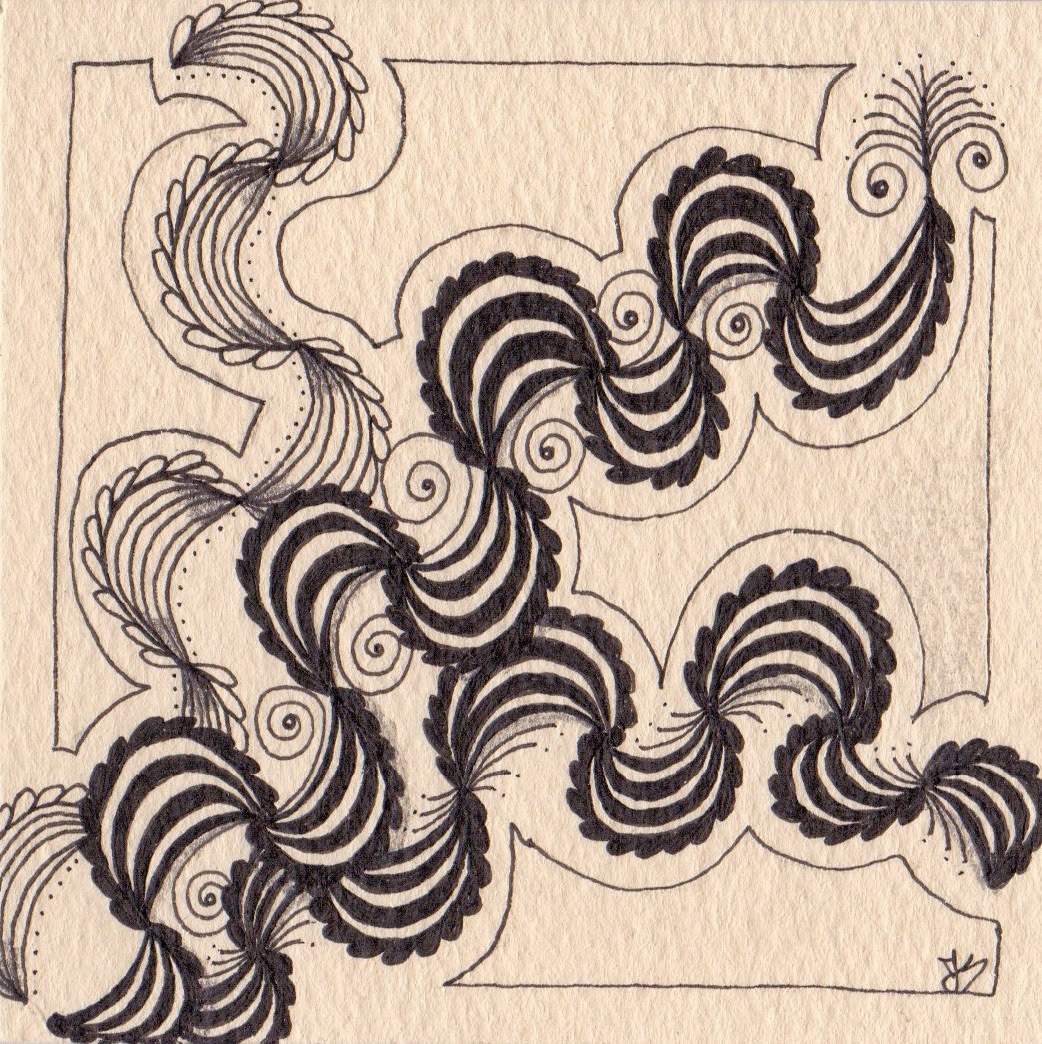 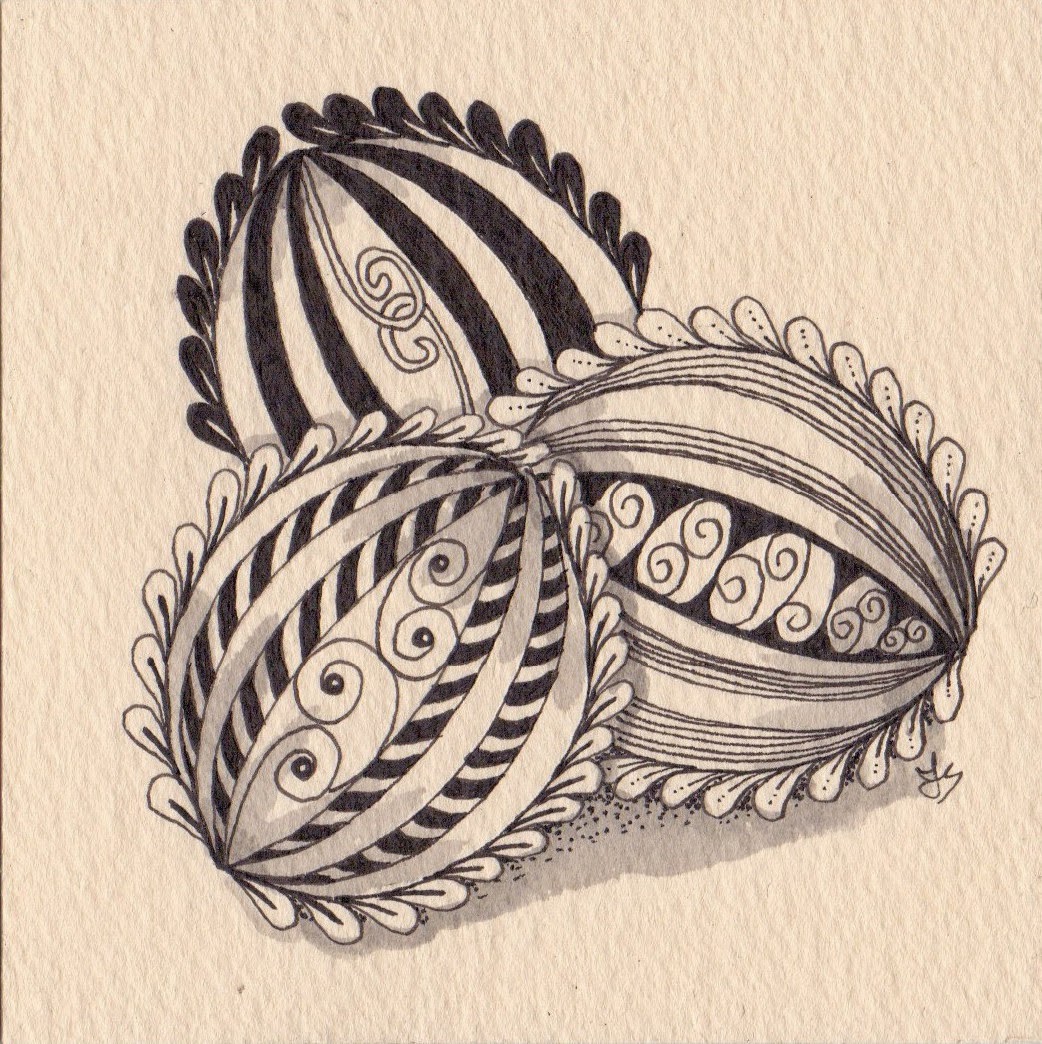 We have two camelia - one out front, the other out back.  The one in the back is white and is half hidden in a shaded corner.  The one in front is deep pink, and stands just outside the window where I sit at the table to tangle.  They are just past their best now, more petals scattered beneath than still on the branch.

Inspired by this, I decided to free Camelia from her grid for my take on this week's Diva Challenge.

In the first tile I let the tangle form three arcs across the tile and filled and prettified each a little differently.  I like the movement in the lower two - following the line with my eye feels a bit like following the old helter skelter.  And the uppermost arc reminds me of a laurel wreath crown.

On the second I imagined the tangle wrapping three solid spheres.  Once I'd drawn the basic lines (great practice for parallels!) I had fun with filling and spirals and edging.  They look like very peculiar watermelons!

If the first tile takes a few steps away from the original tangle, the second has crossed the road entirely.  And I'm left wondering - is there such a thing as a tangleation too far?  I like how it looks - but I hope that enough of the heart of the tangle remains for it's creator to still recognise it.