then and now, now and then


I'm always a little saddened when I hear that a Zentangle tile has 'gone wrong' for someone.  That they've made a mistake, lost their way,  or simply changed their mind about what they wanted it to be.  Part of the pleasure for me is working through those stumbles and reconciling yourself with wherever you and your tile end up.  Sometimes those 'wrong' tiles even end up torn into bits and buried in the bin.  Which is even sadder!

It's not to say I'm immune to those difficult tile days.  But one thing I never do is throw away a wayward tile.  I'm naturally frugal for a start!  What I do is tuck them in a little basket... for later.  And thus my Leftovers Project was born! 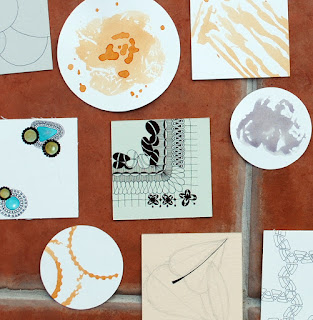 This week, torn between too many choices and not enough time I decided to revisit old tiles instead of starting new ones.

First up this green tile that's been lurking on my pile for a good few years.  I found it with the line work half done, on some rather hard to handle tinted watercolour paper that I rarely use now.  The tangles were also ones I haven't used in a long time.  One of the most interesting things in revisiting these old tiles is spotting the changes in my tangling, my skill, style and choices.


To finish it off I completed the outstanding tangles.  Then anchored the bands to the edges using more tangles.  I added a touch of green coloured pencil and shaded.  Who knows why I didn't like it then, but I do now.

Next up this autumnal looking arc.  I presume I tangled this while trying to get to grips with Peaknuckle.  Drawn over a band of watercolour, again it was abandoned at the line work stage.

I added shading and highlighting with coloured pencil and graphite.  It looks a lot happier to be finished, but it's lacking in contrast a bit.  Sometimes a tile is set on a path by my past self and it's hard to change that direction.

And lastly there wast this.  A strange looking tile, left at the line work stage, with only one corner blacked in.  I blacked in two more corners and then grew tired of the effort!  Which is perhaps why I abandoned the tile in the first place...


Rounding the remaining sections seemed a decent halfway measure to fully filling them in.  I shaded and added tiny pops of the two colours I still had out from my other two tiles.  Sometimes a little touch like that can really finish off a tile, and also pull three disparate pieces together into something close to cohesion.

There were also a couple of others I worked on, which still remain stubbornly unattractive and I can't see a way to redeem them at the moment.  They have been returned to the basket, perhaps their day will come, even if it's not today!  So, next time you go to throw away a tile, think again... who knows what it's one day destined to become!

Email ThisBlogThis!Share to TwitterShare to FacebookShare to Pinterest
Labels: colour, The Leftovers Project

My last post was word heavy, and I really appreciate all of you who took the time to wade through my extended musings as I led my Zigzangles out into the daylight for the first time.

This time I'll be brief and share a few tiles I've drawn in the last week.  Firstly this tan tile that inadvertently combined the two most recent Diva Challenges.


Then a tile I didn't finish in time for Adele Bruno's challenge for last week.  The first time I tried to read Orwell's 1984 I couldn't connect with it.  I tried it again a handful of years later and it all made sense.  Sometimes it's just a case of the right book at the wrong time.  It's not a situation limited to books either - and I think Adele's Iza tangle has the 1984 effect on me.  I first played with it years ago - and liked how it looked, but this time I really connected, I felt the tangle as I drew it.  And I think that shows in the finished tile.


And lastly a few Bijou.  I'm still keeping my pledge to make a Bijou for every It's a String Thing challenge I fail to make a full size tile for.  I noticed I'd missed one right at the start of the year, so that's why the first one uses an 18 as its string - we'll be doing a 19 before we know it!

the wonder of wending

Recently I've read a few really thoughtful posts that encourage us to look at how we create as well as what we create.  Most agree with or develop things I've touched on in previous posts on this blog.  I'm a philosopher at heart - I like to think about what I'm doing, why I'm doing it, how I'm doing it, as well as actually doing it.  It adds another layer of meaning and depth.  It adds to the mindfulness.  Of course much of my thinking doesn't actually occur while I'm in the zone actually moving the pen across the paper.

I'm going to share some art with you today, and I'm very excited about that - but I also want to touch on a bit of the thinking that occurred around its creation. 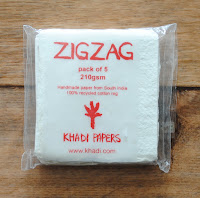 A while ago I wrote about the dilemma of having more than enough art supplies.  I'm not reckless in my purchases.  I love to read lots of reviews and make balanced decisions before accumulating more stuff.  I'm pleasantly confined by a lack of storage space which means my materials have to earn their right to be there!  I usually know how I might use something long before I buy it.  But occasionally I spot something that has potential, without clearly knowing what I might use it for.  And that was the case with this pack of cotton rag paper zigzags that I bought at the start of 2016.  I've worked on this type of paper before - it's challenging and rough but worth the effort. (Click to see slightly larger pieces on this paper.)

Two other significant strands of my creative practice wove into what happened with these little zigzags.  Firstly was the ability, which I'm very slowly developing, of not joining in with everything.  There's so much on offer, so many challenges, techniques, tangles - it's wonderful and overwhelming.  I want to dive in, but I don't want to drown.  I want to graze along the buffet table, sampling the delights rather than gorging myself. 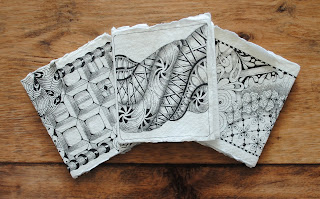 Way back in early summer I spotted a few people on Facebook doing something wonderful where they tangled in a concertina book and their tangling travelled over each fold and onto the next.   They called it the Infinite or Endless Zentangle Project.  And a bit of questioning led me to discover that it was the brainchild of Natalie Plechkova.  She blogs about it here on her website - it's written entirely in Russian, but you can translate it via Google and get a fair approximation of her meaning.  And of course the images are a true delight in any language.  For a more instant visual hit take a peek at her Instagram feed.

I was charmed and hungry but knew that the true beauty of this thing was being able to stick with it over the long distance and I doubted my own stamina.  A few weeks later I had an idea - perhaps I could do something similar but over a shorter distance?  A finite Zentangle project?  And suddenly those zigzags heard their true calling.

On the 14th June I tangled the first panel on my first zigzag.  I noted on the back that it was a rainy, chilly Thursday.  I completed another panel every week for the next 15 weeks.  I stopped myself from doing more than one panel a week.  This was a case of pace not race! 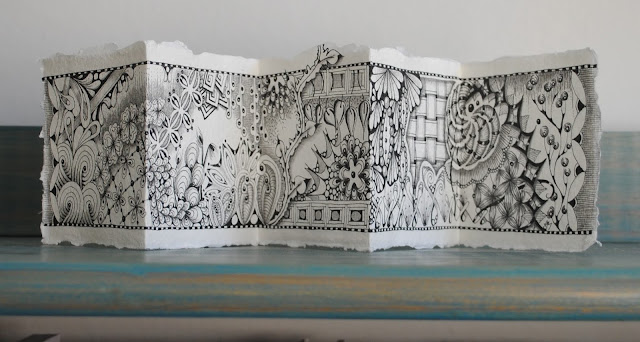 Here it is.  Filled with more tangles than I care to list.  All packed more tightly together than I would usually do.  Each panel measures about 7cm x 8cm.  Here is is laid flat to allow for a better look.

One week after finishing the first I started another.  The 20th July, when I noted that it was cloudy but we'd still had no rain.

For this one I used Margaret Bremner's rope string idea - but needed to create breaks between panels for the rope to look right.

Somewhere along the way I decided I needed a name for these things - naming has power, it makes us feel connected to things.  I like playing with words, breaking them and putting them back together again.  I stirred a few things on my tongue but came to like the word Zigzangle!  So that's what I am calling these.  For you they might answer happily to another name!

On this one I let grid tangles take centre stage.  Jumping back and forth adding extra little details in to tie the panels together.  But still only working on one panel a week.  I began this third Zigzangle on 31st August where I observed the first intimations of autumn.

Although I've been working on these little strips of paper and ink for a few months I'm only sharing them with you now.  And that's due to the second creative movitation, and one that I talked about a while ago when I mentioned the benefit of sometimes working for yourself alone.  I wanted one-to-one time with my Zigzangle.  I wanted to get to know them, and know them well, before I told you what they were and showed you what they looked like.  But now I have, I'm glad I have.  And I hope for you it was worth the wait.

As I headed to my sketchbook today to note down a couple of new tangles that have taken my fancy I realised it's been a while since I shared my sketchbook secrets with you.  So here goes with the four pages I've filled since June - 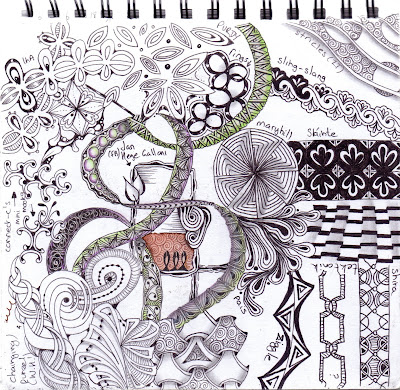 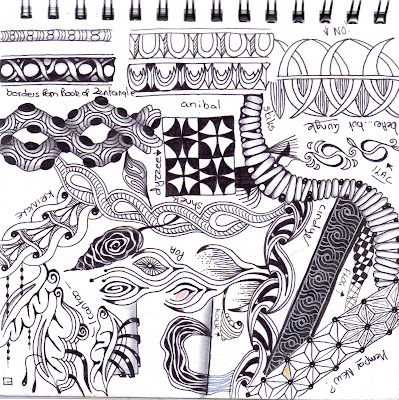 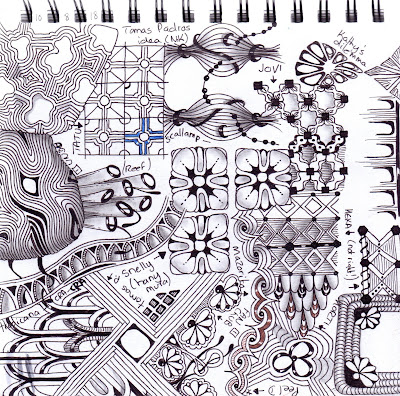 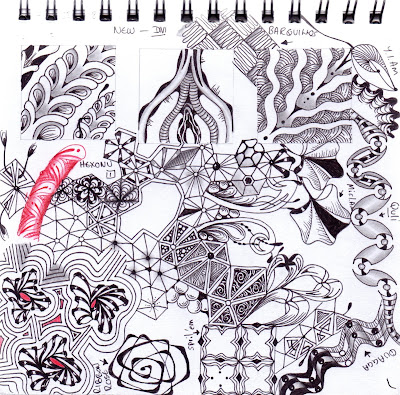 
I've included some links this time - to tangles or techniques that I mention.  But if there is anything else you spot that you can't decode or would like to know about please just ask!