For this week's It's a String Thing challenge we were offered the chance to explore a lovely loopy string and four eager tangles.  I'd worked with none of them before so had fun learning them, putting them through their paces, and seeing together what we could achieve.  I drew quite a flouncy tile which I've submitted to Adele, but I fancied seeing what a stripped-back version, using only two of the tangles and a bit of colour might look like.  And the answer is this - 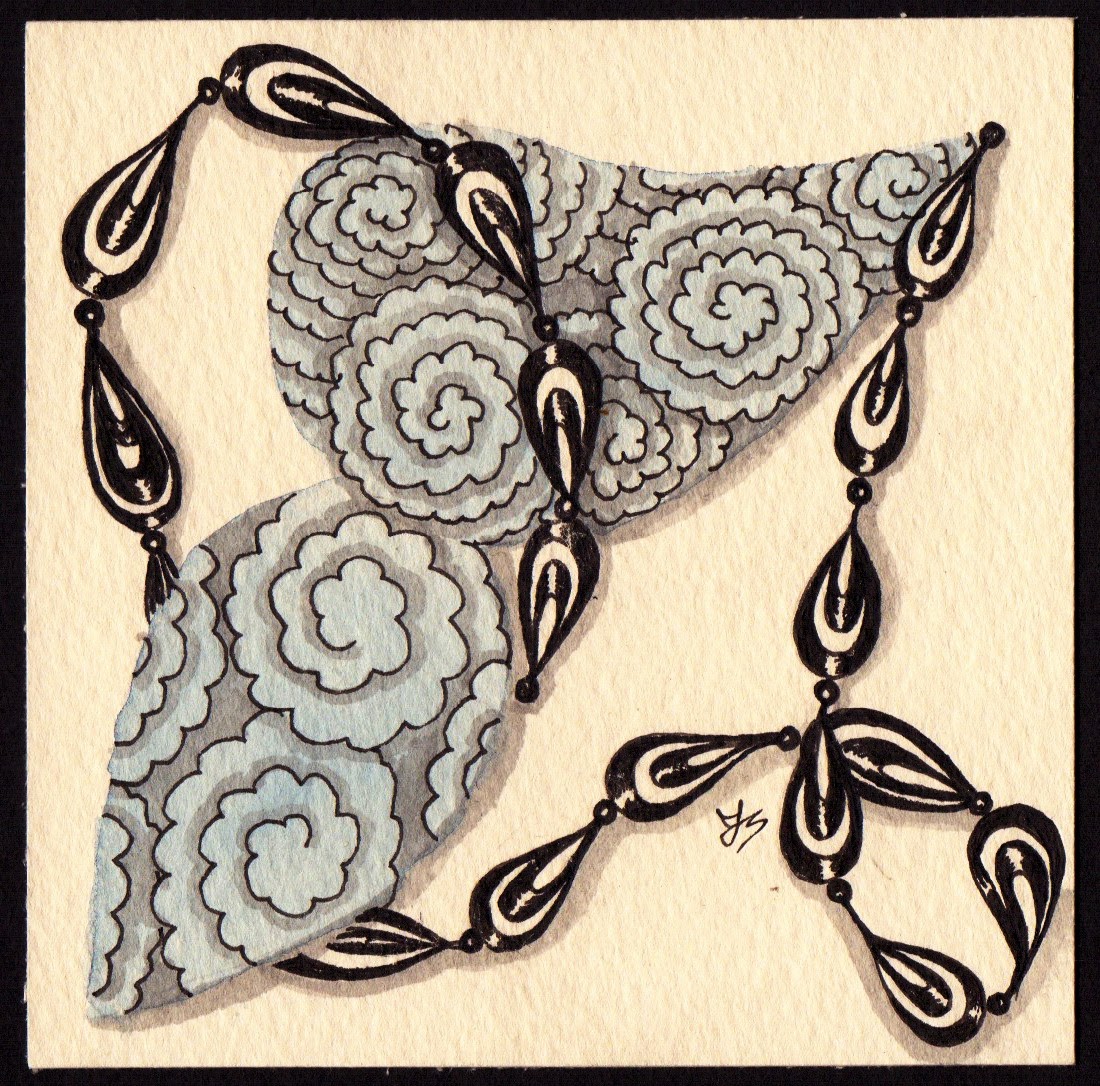 I drew some Drip Drop along part of the string line, and then added some Inktense colour into two of the sections.  Once dry I tangled these with Dust Bunny - a tangle that is easy to underestimate - it looks like quite lazy bumpy spirals, but with some gentle placement and shading it looks wonderful - like stirred clouds, or the kind of fabric pattern long lost to easier decades.  I did my final shading with a Zig Clean Color brush pen.

And once I'd finished I realised I'd dislodged a long lost memory.  I used to own a single earring, bands of black and silver and crushed turquoise.  It looked a whole lot like one of the Drip Drops.  I don't know where I got it from, and I only ever had one.  I used to wear it all the time.  It was second hand, which doesn't seem that hygienic but when you're young you care less about that kind of thing.  I presume someone had lost it and I found it.  I don't know where it is now, I haven't seen it in years.  Perhaps it's moved on to a new owner, or found its way back to its mate.

in the arms of the angles

When a new official tangle was released last week it was only to be expected that it would feature in the following week's Diva Challenge!  And so I spent time playing and thereby practicing Ing.  And what a joy it is.  Boundless scope for variation - I know I've merely scratched the surface of its potential.  I even find myself thinking about it at times when I'm not near pen and paper!

Some new tangles seem to encourage me to play with them using multiple lines - somehow this helps me feel the shape of them, get to know how they move and work, and thereby draw them again and again by feeling the tangle as opposed to thinking of how to draw it.  So that's where I started with Ing - as can be seen in these two tiles.

The first features the curvy version, which gives it a more ribbon like effect.  I filled the back panels (as I like to think of those last sections you draw) with different tangles to break away from the planty look that was developing.  Having done the three Ings I wondered about adding more to the tile but thought it was time to stop.

On the next tile I did three vertical straight edged Ing.  They look so architectural and sharp - metallic but also wooden, and also icy.  I wrapped an odd tube thing round them with a few tangle-tendrils coming from the ends.  And I though I'd leave it there - but it felt a bit lacking - so some Msst from above and a few shiny stones below and a bit more balance was achieved.

It's hard to believe that pen and pencil on paper can convey such solidity and such movement - but they do.  I know I won't be the only one Ing-ing for quite some time!

I couldn't immediately see my way into this week's Diva Challenge.  I liked the look of Annette Carlo's X-Did but didn't want to just use it in stripes as that felt too close to like week's tile.  I sat with it for a couple of days, played about in my sketchbook and today decided to see what I could do.

I've chosen to share a few work-in-progress images as I was pleasantly surprised to see how it came together in the later stages.  I knew I wanted to break out from the striped form, so I lightly pencilled in the parallel lines and then later erased them (cheating the pure Zentangle form, but sometimes I need a little help to get the results I want!).  I then drew in all the basic outlining of the tangle, offsetting the rows from each other, so large diamonds were above small etc.  That stage took focus to remember which lines were meant to be going where.  It's also hard to keep the lines parallel to each other.  It can look good when warped too, but I wanted to keep it quite even throughout.

That done I knew that I most liked the tangleation Annette drew where the sections appear sunken (Variation 1) on her step-out, and that was the one I wanted to use for my tile.  I then put in all the inner lines.  I failed to keep their depth equal throughout which would have been preferable.  I also darkened the middle diamonds.

It still didn't look that good but I hoped that shading would work its graphite magic.  Which it did, but something was still missing.  So I rounded the outer edges of each section, which seemed to work a treat - tying the whole together as well as smoothing out any wonky lines or untidy corners.

I'm quite happy with the result.  It looks slightly different each time I glance at it.  Sometimes it could be the pattern on a blanket.  At others a web of jewelled beads strung together.  And then I see a smooth surface with little dips just begging me to poke my fingers in.