Good things come to those who wait.  The new tangle I'm about to share with you appeared as a mere inkling a couple of months ago.  I've given it time to grow, to develop, to change and truly show itself to me.  But now I think it's ready to see the light and to maybe hop from my page to yours.

It arose while planning how to fill a couple of leaf shapes on some stunning eco-dyed tiles that a Travelling Tangler in my swap group sent to me.  This is not one of those tiles, but looks similar - and seems a good place to start as autumn begins to comb her fingers through our days.


The tangle is based on a series of Y shapes each fitting into the next and growing smaller as they go.  You may see Y shapes, you may see forked branches or paths, or turned upside down perhaps even wishbones.  I call it Divi because of the nature of it constantly dividing itself.  If the forks of Divi were in Robert Frost's road in the woods there'd be plenty of choices ahead of you!

The step out is really quite simple.  Divi is very forgiving of wobbles and inconsistencies.  Your Y shapes can be curvy, or straight, or really wavy, or looping upwards or downwards or any which way. I've also shown how it can be drawn along a band (which you could pencil in first). 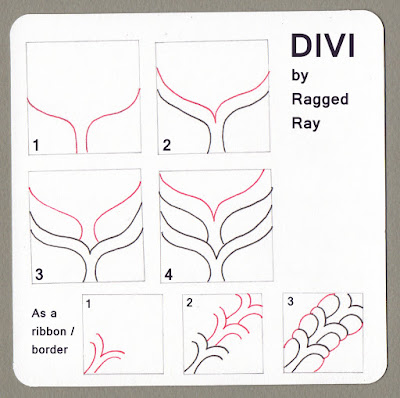 In this next example I've mirrored the starting Y shape, and filled the spaces between branches with Shattuck.  I've then put more thick auras down both sides, and then a few Fescu.  The bands looked a bit too stark so I added some black dots to break them up.


If you draw Divi along a band it can then be embellished in multiple ways.  Tangled like this it has similarities to Chainlea, but is different enough too I think?


I can be drawn without much additional ornamentation - and take on another look entirely.  This version nods to Ruutz and also to Wind Farm - but again, it differs significantly too.


Lastly it can transform into something far more geometric.  You can also fill the bands of Divi itself rather than the spaces between.


Sometimes I think that the measure of a good tangle isn't just how it looks on the tile, but how it makes you feel when you tangle with it - and I know I'm biased but I'm really enjoying the diminishing divisions of Divi and I hope you do too.  I'd love to hear how you get on with it and to see your creations.

As always, if this tangle appears to be too similar to any others in name or style, please let me know.
Posted by Ragged Ray at 16:31 16 comments:

a little of what you fancy

I don't think I have too many art supplies.  If gathered together in one place they would fit in two drawers of my old bureau.  I've seen people with far more, and equally people who create magic with a ballpoint pen on scrap paper.  I resist the urge to buy every new pen that catches my eye.  I read copious reviews before trialing a new paper.  And often I come back to my old favourites again and again.  But sometimes I think perhaps I have more than enough - in the literal sense of the phrase.  I have more than I can hold in mind.  More than I can choose from.  Things get forgotten, which of course also allows for the thrill of rediscovery.

And so it was this week.  The Diva challenged us to tangle with straight lines only.  I knew I wanted to draw bands of Shard, a tangle I rarely use despite it being a close cousin to Baton which is one of my favourites.  I almost grabbed a square tile, then I remembered my 3Zs!  A little box of precious triangles I treated myself to earlier this year!


I recently took myself a week long holiday at home.  Time spent with loved ones, away from normal activities, chores, hours spent on this computer.  We talked, we read, we ate cakes, we laughed, loved, listened to starlings singing from the fir tree, we slept late and long, and walked out on a grey day to a beautiful little churchyard.  And of course I wanted to tangle, but didn't want to be rooting through options.  So before I 'left' I packed up a little set.  3 tiles cut down from Zentangle Apprentice tiles, to something postcard shaped (roughly measuring 11 x 8 cm).  My trusty black Uni Pin 01, a turquoise Copic SP I very rarely reach for, a Zig Clean Color Brush in Haze blue and a pencil and stump.  And these are the tiles that came from that.


To summarise - I like having choices, but not too many.  I like limitations too, but only if I know I can break free!

Earlier this year The Diva did a wise thing. She recognised that she needed to take a break from creating and sharing her weekly challenges with us. And she not only recognised that need but she claimed it too. And she asked us to support her in this, as I'm sure we all have, much as we've missed her. She was also incredibly brave in telling us why she needed that break. Just because she's back we should assume she might never need to take a break again. Her return is a valuable reminder for us to listen to ourselves, listen for the sometimes quiet voice of our needs.  To ask and claim and sometimes demand what we require.

Sometimes the momentum of life keeps us moving on without giving us the chance to stop and take stock of where we are, where we come from and where we might be going.  Zentangle, and particularly this week's Back to Basics challenge, gives one way to take stock thanks to these little black and white snapshots.


Just over five years ago, on the 18th June 2013, I drew my first ever Zentangle tile.  A square of postcard paper, a black fibre tip, a Woolworths pencil.  Since then I've learnt so much.  A wide array of different tangles and techniques.  My pen control has improved enormously. I've learnt to use highlights and shade safely even near thick black ink on those super soft tiles!  I've learnt the value and pleasure offered by superior materials.

I often share my very first tile with new tanglers, or people who are doubting their ability.  With regular mindful practice it's almost impossible not to improve, and having fun while doing so!


Today I drew a tile - on beautiful Italian paper, with a juicy Pigma Micron pen, and my trusty old Woolworths HB pencil.  I started with four dots, a border, a string based on my initials and chop.  I used the same three tangles from that June day - Crescent Moon, Static and Tipple.  And it couldn't look more different.

And while I'm thrilled  and grateful at all the progress I've made there's a little bit of me that misses  the naivety of where I started from.  That giddy combination of not knowing what you're doing but loving it all the same.  The innocence of just putting marks on paper without a bulk of knowledge and ideas all trying to suggest themselves loudly in your ear.  But I'm not Peter Pan, I had to grow up, but maybe one day I'll come full circle and find my way back to Neverland.

I've only sent a handful of tiles to dear Adele in time for her weekly It's a String Thing challenges.  A few I've finished but too late for the deadline and I've posted them here instead.  But the rest I've still managed to enjoy thanks to sticking to my year long pledge to make at least a Bijou if I don't have time for a full tile.  Although admittedly some of these were completed some time after the challenge!

These are real tests of economy and invention, how to fit the string, or occasionally only part of the thing onto a tiny tile.  How to bring in two or three tangles and make them play nicely.  How to get shading and highlight and sometimes colour harmoniously working in a two by two inch space.  Challenging,  but really rewarding too! 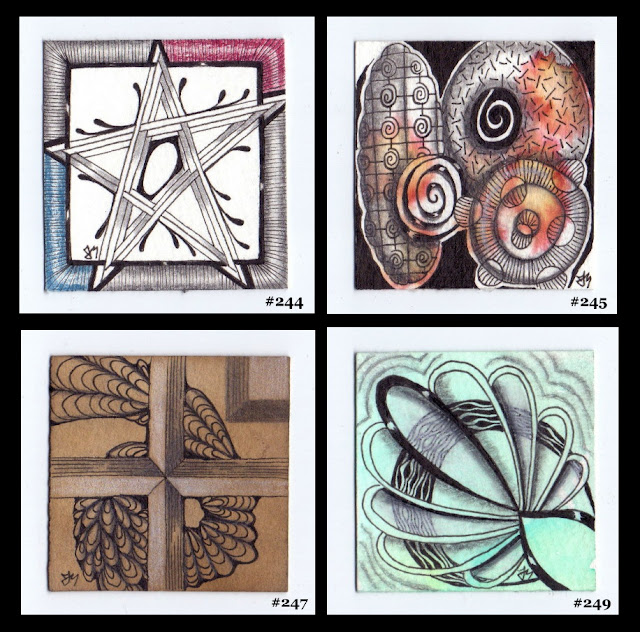 On quite a few of these tiles my tangling deviated quite some way from how the tangle is 'meant' to look - my D'rua insisting on becoming Antidots, and my Baraquillos is totally wrong but looks just as tasty!  But how much of life really turns out like it's meant to? At least in Zentangle you can still guarantee a happy ending!

A few of these were done on pastel paper - I find it works nicely for the limited space, allowing for simple highlights and shading to really stand out.  It was drawn a while ago but IAST #253 features a broken version of Printemps that I've drawn a few times.  It's a simple but incredibly versatile tangle as shown by Margaret Bremner in her hot-off-the-press post - Printemps, And Then Some. 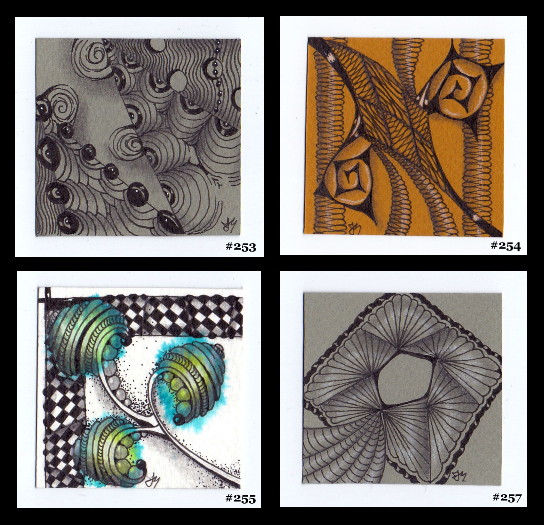 And as always there were a couple of pleasant surprises.  I had a couple of tiles that I'd done some watercolour blobs onto and then discarded onto the pile.  I picked one for challenge #245 which was donut / doughnut themed!  It had a jammy look to it that I thought might work.  I didn't really like the string, or the tangle selection - and yet I really like the finished tile!  Isn't that strange!  And the same happened with challenge #255 - I played with Konk but didn't like it a great deal, but once I tangled it over some colour bursts I love it.  And some tweaking and shading made me see the appeal of Flog too!

I'm sure I'll miss a few more IAST challenges before the year is out, but there's always a ready supply of  tiny tiles in my little tin!

Footnote
I've had a bit of a tidy up here, a new header banner, which I aim to change seasonally.  But most importantly I've tidied up all the different buttons to my tangles on my sidebar.  Instead they are all group together clickable via the single Ragged Ray's Tangles button.  Thanks to Susie Ng for her invaluable technical help!