A new year of a new decade and what better way to kick off 2020 on The Ragged Ray than with a new tangle!

The origins of this tangle go back many years – it started as one of the many scrappy ideas I play with but set to one side. In December I saw a piece by German CZT Stephanie Kiefhaber which really caught my eye. She'd used a repeating shape and acknowledged that she didn't think it was any named tangle. I told her that I'd played with an idea for something similar many years back but hadn't worked further with the tangle, drawn a step-out or named it. I showed Stephanie my scrappy notes and she encouraged me to develop my idea – and so I did. It's my pleasure to introduce you to Quin! 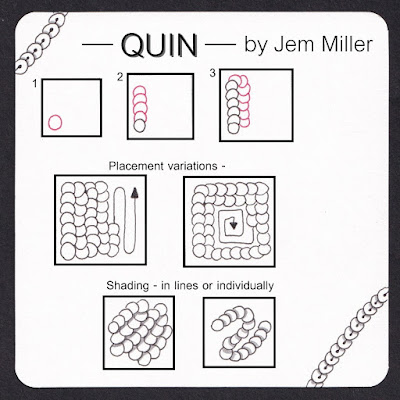 Quin clearly shares tangle DNA with official tangles Tagh and Centipede as well as with Adele Bruno's C-Perfs. But I think it has enough of its own character to merit its own name – do you agree? It's a tangle that asks you to draw slowly, and shade carefully, but it's rhythmic and mesmerising to use. Resembling scales or petals it adds texture and depth to any tile. I named it Quin for its resemblance to a string of sequins - and while I mostly tangle it without an the extra dot and dash, if you're in a representational mood they can be a fun addition too! If you find any weird angles or wobbles that you don't like when tangling Quin, simply darken them with your pen and you'll find they add character.

Before the festive break I cut and coloured some bright white Clairefontaine papers - one smooth and the other with some texture. I added a touch of colour using two Finetec watercolours (Blue Silver and Lavender) that my dear friends Debbie and Stephanie (a different one!) in Singapore sent me last year. It's hard to capture the beauty of these mica-rich pigment paints, which offer one colour when viewed straight on but another shade of shimmering magic when tilted to catch the light (you can catch a glimpse of what I mean in the photo at the top of this post). They bring a subtle but welcome shot of colour which plays so well with the white tile, black ink and grey shading.


That's all for now. I hope your year is getting off to a good start. And I hope you enjoy getting to know Quin – please do let me know if you use my tangle and how you find it.

[As always, if this tangle appears to be too similar to any others in name or style, please let me know.]
Posted by Ragged Ray at 16:16